Shangri-La. One of the most spectacular scenes in the world. Only the most talented of creative writers could begin to compose a synergy of words that could give justice to this real life visual experience. A fantasizing mind could work in concert with nature in realtime, bypassing millions of years, and could not create a more lush and beautiful oasis in a place it would never be expected. Words like awe-inspiring, astounding, brilliantly breathtaking and spectacular would fall short of describing this incredible place. So, we'll let the pictures do most of the talking.

The People of the Blue-Green Water

The Havasupai Reservation is home to the Havasupai Indians whose ancestors settled these lands thousand of years ago. They were able to cultivate soils at the bottom of the gorge as agriculturists and lived on what they grew, hunted and fished along the Colorado River which carved the Grand Canyon over a period of millions and millions of years.

The Havasupai Indians are very shy, reserved people that live in a remotely secluded territory on the canyon floor beneath cliff canyon walls. Members of the Tribe number about 660 with about 450 still living on the reservation. Almost all of them work for the Tribe catering to the over 25,000 tourists that visit every year. While shy, they are hospitable people that welcome visitors to their reservation.

The heart of the Reservation is the Village of Supai which sits at the bottom of the gorge in Havasu Canyon astride a crystalline blue-green stream called Havasu Creek. Supai is framed on three sides by towering colorful canyon walls. The trek down to Supai is about 8 miles and begins at the top edge of the canyon at a spot called "Hualapai Hilltop" which is a cliff-side parking lot at the dead end of Arizona Indian Road 18.

The hiking descent into the canyon to reach Supai Village starts at Hilltop. There are no services at Hilltop. Outdoor enthusiasts have the option of hiking down by foot, taking horses or taking a helicopter from the helipad located at Hilltop. The Village has a lodge, restaurant, general store, elementary school, tribal offices and a limited urgent care center. It has a post office which is the only one in the country still serviced by a Pony Express system. There are no paved roads on the reservation. No parking lots. No internal combustion engines except for an occasional tractor preparing fields for corn, melons and squash.

Tribal members that live in the Village make infrequent trips to Kingman, Arizona to buy groceries and supplies. Some members leave cars parked at Hualapai Hilltop to make the drive to Kingman. They arrange to ship non-perishable items to Supai and typically pack perishables and immediate need supplies to Supai via pack mules or horses. Besides the tranquility of being amidst the natural beauty of the Grand Canyon area, the allure is the series of four turquoise and emerald green waterfalls that together form this amazing oasis. The breathtaking scenery begins about a half hour walk from the Village of Supai. Each waterfall is uniquely spectacular and all are within just a few miles of Supai. They include Havasu Falls, Navajo Falls, Mooney Falls and Beaver Falls.

Havasu Creek, fed by springs, have a high mineral content and carbonate precipitate that account for the cascading falls, pools and natural travertine dams. Towering cottonwood trees, grapevines and other flora create the lush foliage that accent the waterfalls. Soon after entering the trail to the oasis and campground, the sounds of water flow can be heard before the falls come into view. The water temperatures are a relatively constant 70 degrees F throughout the year making swimming and lounging beneath the falls a pleasure that is unimaginable. The brilliantly colored waters eventually make their way to the Colorado River which the Natives call the "Big Waters". Following the trail along Havasu Creek, the first waterfall you'll discover is Navajo Falls which is just 1.5 miles from Supai Village. Named after a Supai Chief who negotiated a treaty with the federal government, Navajo Falls cascades 75 feet into an emerald pool that is excellent for a refreshing swim on a warm day. Havasu Falls is the most spectacular of the four falls and is the main attraction. It's existence announces itself before coming into view with a loud roar of the river that is hidden alongside the hiking trail. Havasu Falls is sometimes called "Havasupai Falls" and plunges 100 feet into a natural amphitheatre carved out of the red cliffs. Twin falls mist the entire area and spill into dozens of pools and secondary falls that cascade over small natural travertine dams. Havasu Falls is one of the most photographed waterfalls in the world. Once you see and experience it, you will realize why. If you didn't know you were in Arizona, you could imagine being somewhere in Hawaii. Havasu Falls is simply an incredible paradise. Havasu Falls and its campground is only about a half-mile past Navajo Falls. About another mile down the trail from Havasu Falls, is the 200 feet tall Mooney Falls which is higher than Niagara Falls. It is named after a cowboy who fell to his death from the top of the falls. As you explore this unique area and climb its sandstone cliffs, use extreme caution. There are a series of narrow caves, wet and slippery rocks, makeshift climbing ladders, iron hooks and rusted chains carved into the cliffs for those that dare. 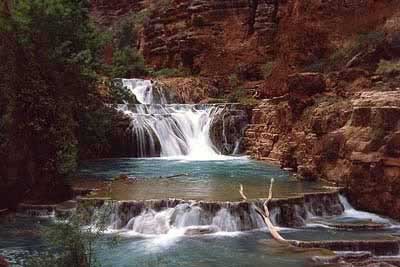 Beaver Falls is about three miles down the trail from Mooney Falls and is the last of the four series of waterfalls on Havasu Creek. The rustic trail crosses the creek several times before reaching the falls. Beaver Falls is a gorgeous series of shorter falls located at the conflux of Beaver and Havasu Canyons. This is a serene and very secluded spot on the creek before making its way to flow into the Colorado River.

Getting To The Falls From Hualapai Hilltop

You can hike, take a horse, use a mule train to carry your gear or take a helicopter down to Supai Village. You also have a choice using a horse or the helicopter one way if you prefer just to hike one direction. Many people choose hike down and then take the helicopter out since it is a more grueling hike coming back up the canyon than it is going down into the canyon.

All choices are pretty affordable and begin at the Hualapai Hilltop at the edge of the canyon. Entry is $20 per person. There is a $10 fee to use the campground next to Havasu Falls. There is also a lodge at Supai with 24 units with very reasonable fees. A helicopter ride is $85 each way. Saddle horses are $75 each way to and from the campground. All fees are subject to change without notice.

Hiking. You should be in good physical condition. The first 1.5 miles of the hike is a rapid descent and coming back up, is a strenuous up hill hike. It is about an 8 mile hike to Supai and the trail from Supai to the four falls is about another 4 miles or so. Temperatures can become hot particularly during the summer months, so it's best to plan an early start before the heat progressively increases. There are no services or water at the Hilltop, so bring plenty of drinking water. Dress comfortably with good hiking gear and pack lightly. Visit the Tribe's website for more information. Links are provided below.

Although the Hualapai Hilltop entry point to Supai is only about 30 miles from the Grand Canyon South Rim, there is no navigable road connecting the two locations. The following map gives directions from Flagstaff and Kingman Arizona. The approximate driving times to Hilltop are as follows:

Havasupai Tribe Website
The website covers fees, more descriptions, guidelines, schedules, maps and more information about reserving horses and helicopter usage. Please note that alcoholic beverages and guns are prohibited on the reservation. Tribal members are shy, reserved people and do not like having their pictures taken particularly without asking. This is their home, so respect them and their land and protect this beautiful natural landscape.